Happy Monday. Hasn’t the weather been glorious in London over the weekend? What a change some sun can make. I popped into Paul Smith No.9 Albemarle Street to check out the UK’s first Gumi Chan exhibition that opened a few days ago. I had read about it on Sir Paul’s blog and armed with my camera, I hit the Mayfair store.

My regular readers will know of my admiration and love for ‘everything’ Sir Paul Smith and if you haven’t yet visited his superb exhibition at the Design Museum, do yourself a huge favour and go. Check out my review of it here.

Ok, back to Gumi Chan. Well, let’s start at the beginning. If you want to see inspiring talent, established talent, great mini exhibitions, always look out for what’s on at Paul Smith No.9 Albermarle Street. Sir Paul has got the best eye for raw talent, emerging talent and there’s always something interesting happening there. Needless to say it’s obviously worth a visit just to see and be inspired by the shop decor, fittings, the much sought after Paul Smith collections and the very nice staff.

Japanese artist and doll-maker Kazumi Akao, working alongside production and scene designer Nobuhiko Yoshimitsu created a street scene of Japan 1960’s entitled: Gumi Chan. Every item in the street scene has been lovingly hand-crafted in Japan, down to the finest details. Obsessed with miniatures I had to go and see it for myself.

When I arrived, a member of staff immediately took me to the spot and started telling me about the project. Kazumi, disillusioned with what’s going on in modern Japan,

“feels that Japanese people have lost their habitual happy spirit. The Japan of 1961 was a place of hope, it was a time of optimism, with the economy undergoing huge growth and people beginning to dream of creating a better society. Everyone helped one another, and shared a common bond. Kazumi dreams of re-creating this happy time of neighbourliness and co-operation.”

Kazumi, using her own childhood as inspiration, has been constructing Japanese surburbia in 1961 with her Gumi Chan creations. Sir Paul was struck by Kazumi’s art and offered to exhibit the artist’s work. With Sir Paul’s long history of visiting and working with Japan, Kazumi was inspired to add a Paul Smith shop into her Gumi Chan street scene. How cool is that?

As I was clicking away, listening to excited customers laughing, shopping and generally admiring everything they saw I heard a familiar voice ask me: ‘Do you know what that fellow in the tall red tower is doing?’ I turned around to greet Sir Paul and off he was excitedly explaining to me what was what in the street scene. 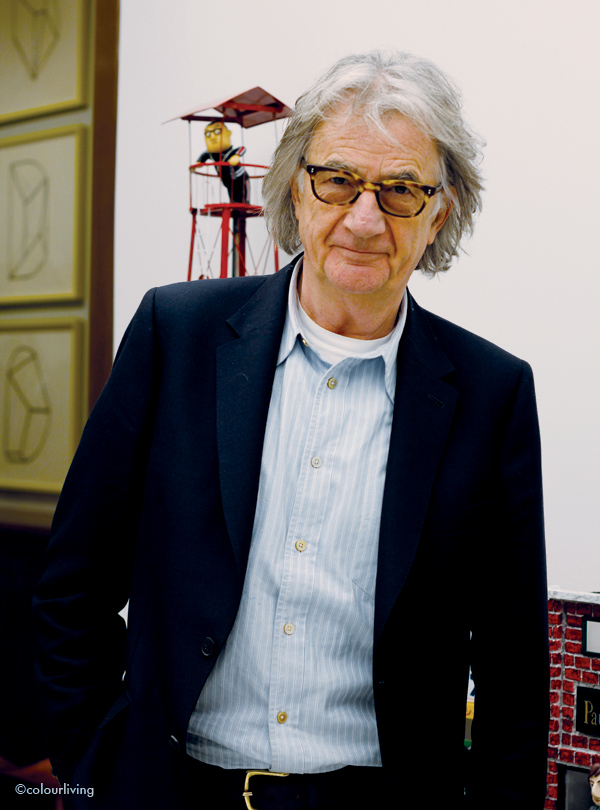 In 1960s Japan, dwellings/houses/shops were built out of wood, so fire men stood in these large fire towers keeping an eye on everything! 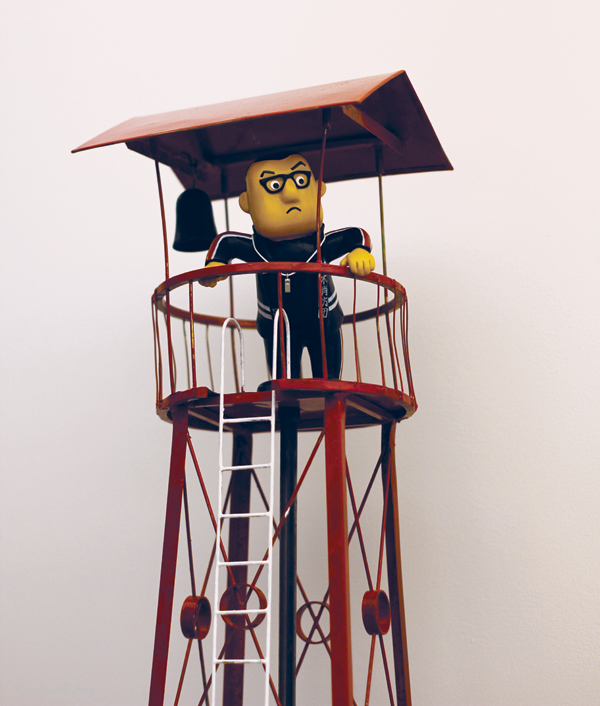 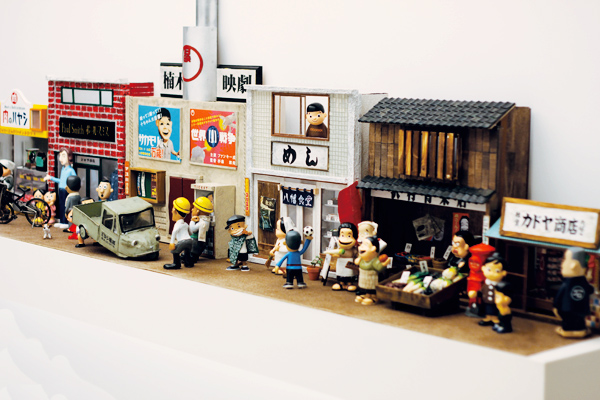 An overview of the street scene. 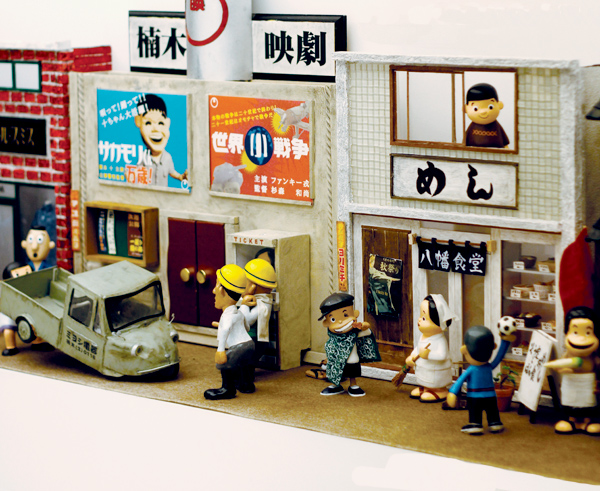 Detail of part of the street scene. 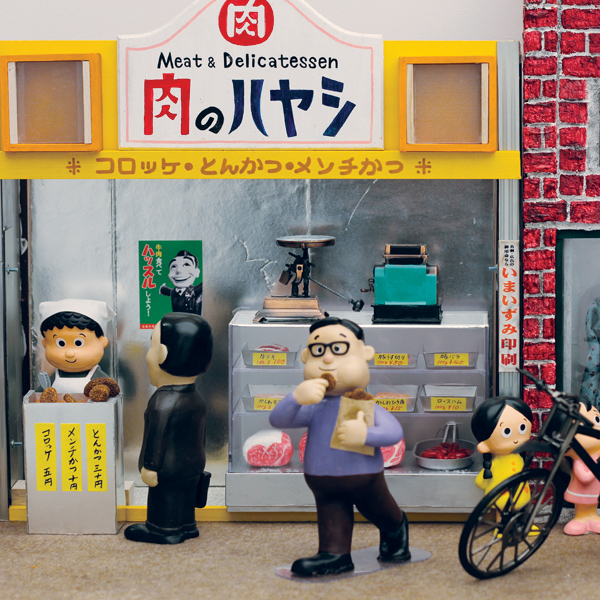 Sir Paul tells me that the reason for the Japanese lettering of ‘Smith’ (below on the shop sign) containing the same symbols (3rd from last and last), is that the ‘Sm’ and ‘th’ have the same pronunciation in the Japanese language. 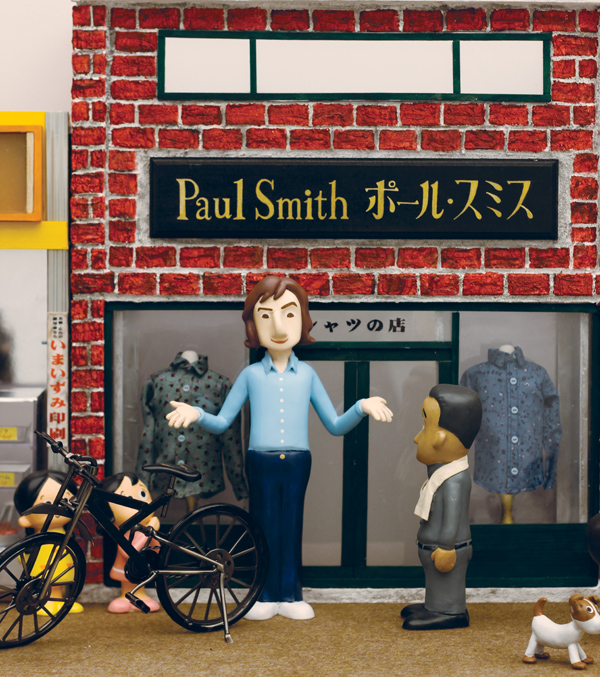 A young Paul Smith with his bicycle in front of his shop. 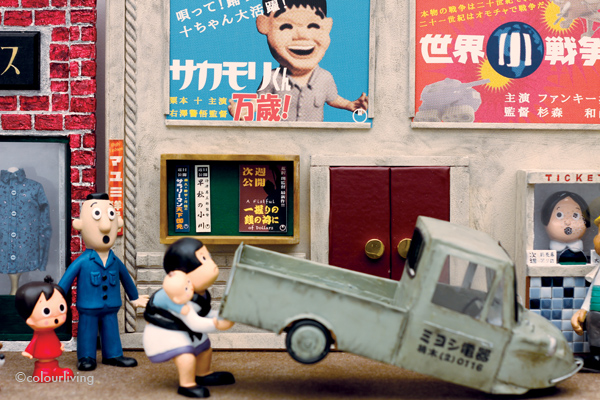 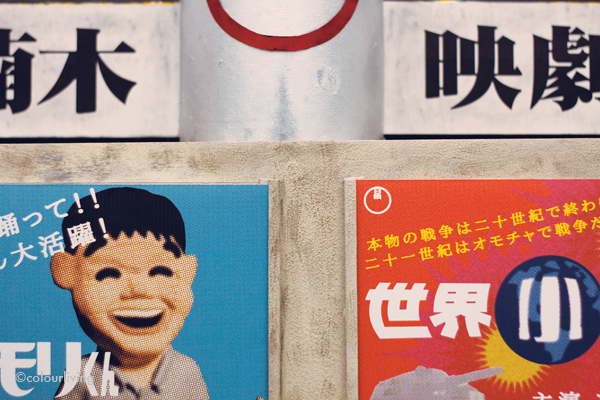 Detail of the Cinema. 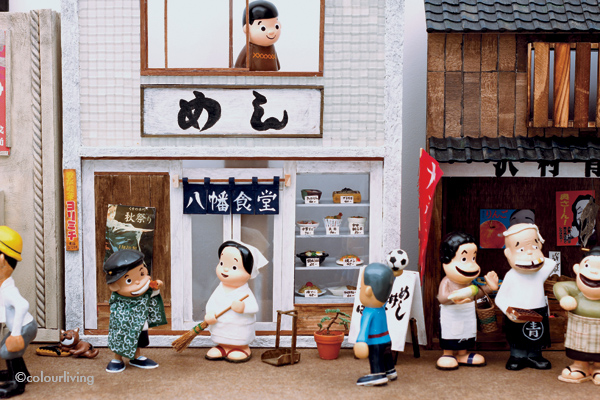 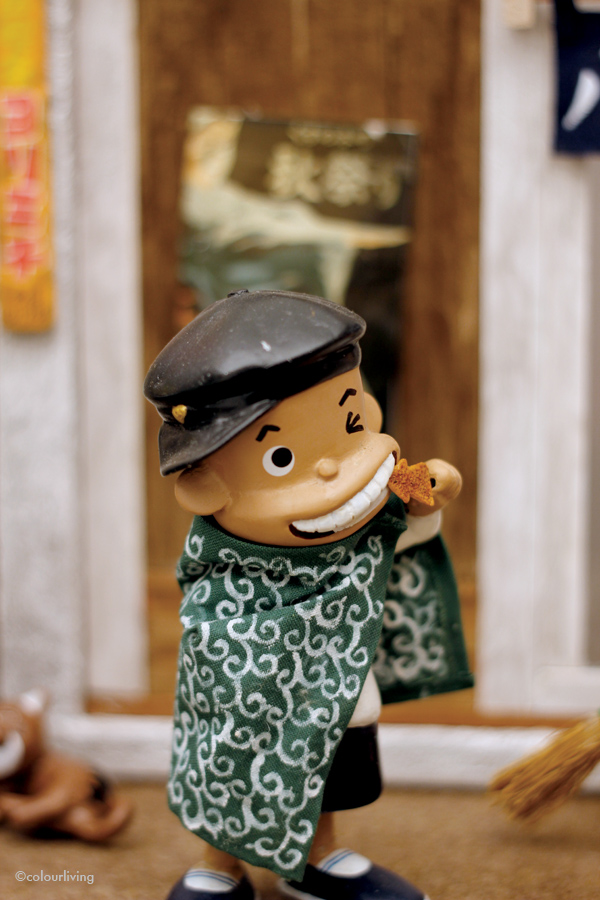 Detail of a child figurine outside the Restaurant. 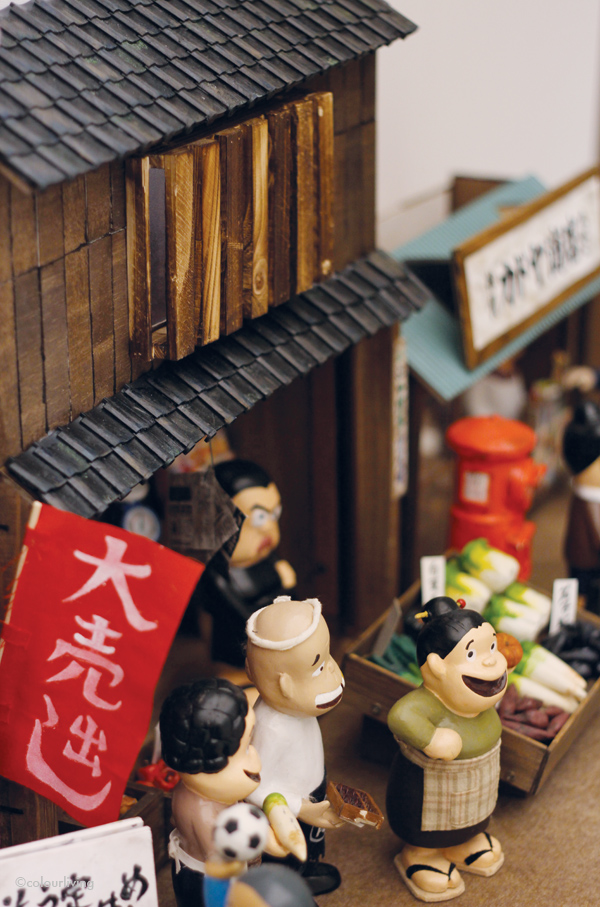 Side view of Green Grocer with a dwelling above. 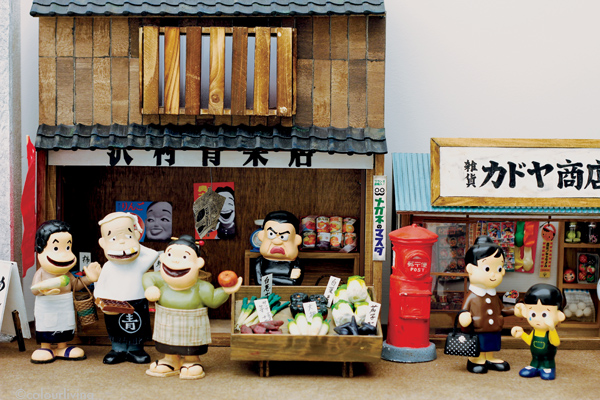 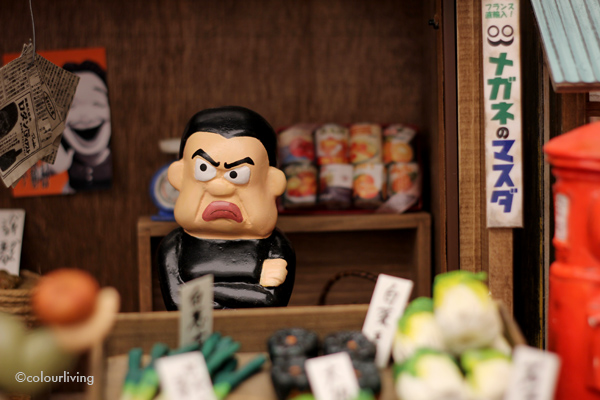 Green Grocer. Think the owner had a bad day! 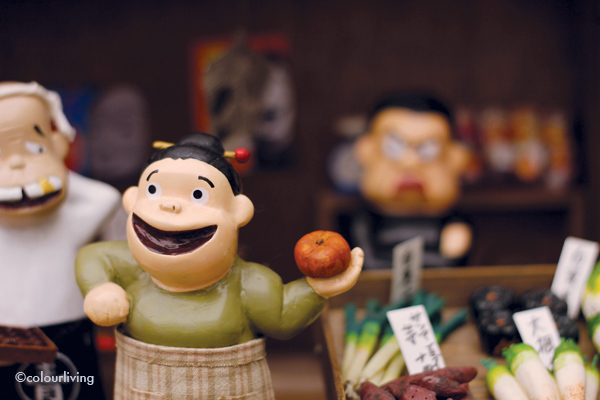 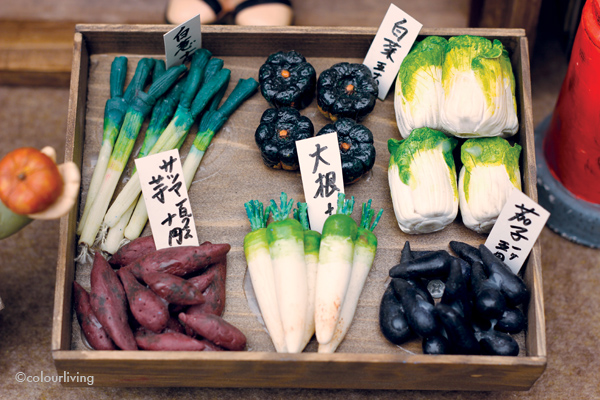 Detail of crate of vegetables outside Green Grocer. 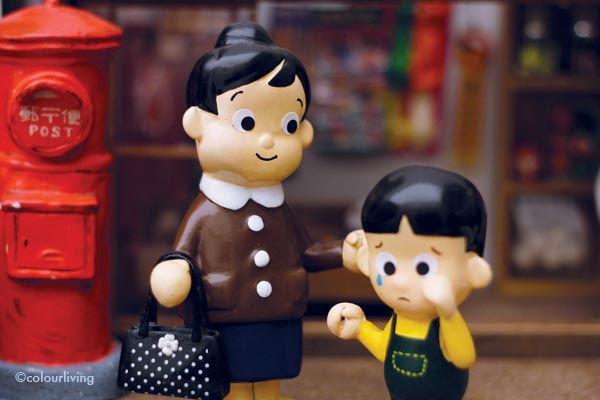 Mother and child figurine outside Kiosk/Toyshop. 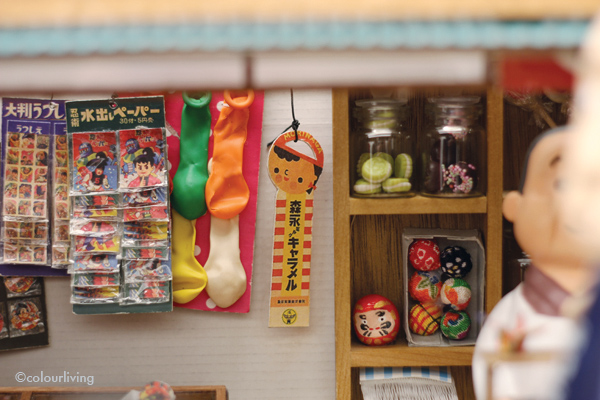 Detail of products sold in Kiosk/Toyshop.

Aren’t the details just incredible? I wish I could have spent longer and taken even more photographs. I want to thank Sir Paul and a his staff for allowing me to be in the way on what was a rather busy Saturday. The shop was heaving, Sir Paul was going around talking to customers, students, chatting and inspiring everyone. He’s like a magnet and creates a most wonderful atmosphere. Shoppers nearby were busy buying shoes, some guys had just come in wanting to buy a wedding suit.

I loved Kazumi’s work and there was so much fantastic detail in the 3 meters miniature display, featuring 30 figurines. The re-creation of a community spirit couldn’t be more befitting in a Paul Smith shop! There was a real community feeling while I was visiting and so it’s only appropriate that the UK’s first Gumi Chan exhibition is being held there.

On a personal note: I was very saddened to hear of the death of Actor Philip Seymour Hoffman, who was found dead yesterday in his New York apartment at the age of 46. He was one of my all time favourite actors and the World has lost a great talent! R.I.P London Design Festival at the V&A Do Ho Suh at the Victoria Miro Gallery